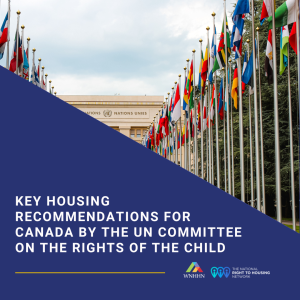 The consequences of homelessness, inadequate housing, and evictions for low-income, Indigenous, and women-led families with children are some of the most serious systemic human rights issues in Canada right now.

On June 9, the United Nations (UN) Committee on the Rights of the Child released unprecedented recommendations in their Concluding Observations from Canada’s first review on child rights in 10 years. With the deepening housing and homelessness crisis having disastrous consequences for children in Canada, we’re pleased to see these recommendations highlight the need for Canada to strengthen its timelines and priorities for eliminating child homelessness and housing precarity.

The Committee also expressed major concerns about the provincial eviction laws currently in place across the country and recommended that Canada revise them to prevent the long-term damaging effects they have on children’s housing security and well-being. These Concluding Observations are an important tool that can be used to hold all levels of government accountable to their duty to protect and ensure children’s rights, including their right to adequate housing.

In 1991, Canada signed onto the UN’s Convention on the Rights of the Child, an international treaty that lays out the specific rights of all children (under the age of 18). Almost every country around the world has committed to protecting and promoting these rights, however, they have not always been translated into practice. To ensure that these international obligations are being met, countries are to submit regular reports to the Committee which cover the national action that is being taken to protect and ensure children’s rights.

This past April, Canada submitted their report on how the government is working to end the human rights crisis of child poverty – however, they omitted critical information about housing need and homelessness among children.

For instance, while Articles 27.1 and 2.1 of the treaty state that all children have the right to an adequate standard of living without discrimination of any kind, research findings continue to showcase the discriminatory underpinnings of Canada’s housing crisis and the ways in which it disproportionately affects already-marginalized communities.

To flag these gaps, the National Right to Housing Network (NRHN) and the Women’s National Housing and Homelessness Network (WNHHN) made a submission to the UN Committee on the Rights of the Child and attended their first review of Canada in 10 years. Here, the UN committee posed a series of follow-up questions to the Canadian government on what is currently being done to uphold their commitments under international human rights law.

The second day began with Canada’s responses on housing for children, youth, and families, where they claimed that the current federal housing programs in place are rooted in the right to housing. Moreover, Canada neglected to answer the UN Committee’s questions on whether there are targets and timelines for ending child homelessness, stating that they aim to cut chronic homelessness by 2027-28. This is inconsistent with past commitments to end chronic homelessness by 2030.

Once the review sessions were complete, we were all to wait and see what right to housing issues would end up in the United Nations Convention on the Rights of the Child Concluding Observations. Luckily, the wait is over.

Clear measures and timelines needed to end homelessness among children

Canada made a historic commitment to adequate housing as a fundamental human right in the National Housing Strategy Act, legislated in 2019, which has clear implications for children and families living in poverty, housing need, and homelessness. However, Canada’s housing policies and programs—captured in the National Housing Strategy (NHS)—have, to date, failed to adequately address the housing needs of these low-income, Indigenous, and women-led families with children.

The Committee acknowledges that “Women and children are particularly vulnerable to housing insecurity due to a variety of reasons including family violence, a lack of affordable housing, low wages, under employment and low social assistance rates.”

In the UN’s Concluding Observations, the Committee recommends that Canada address these gaps by strengthening its timelines and priorities to end child homelessness and guarantee all children from low-income families have stable access to adequate and affordable long-term housing.

They continue, recommending that Canada establish ambitious annual targets to eliminate child poverty – particularly among Indigenous, African-Canadian, and other minority children, with all levels of government publicly monitoring and reporting on their poverty-reduction strategy outcomes.

In our submission to the UN Committee on the Rights of the Child, we proposed that accountability to the right to housing and the full protection of children from homelessness or inadequate housing should be required through bilateral housing agreements. Funding provided to provinces, territories, and municipalities by the federal government should be conditional upon measures to eliminate homelessness among families with children.

Revising eviction laws to protect the rights of children

The pandemic has caused an unprecedented assault on the right to safe and secure housing in Canada, particularly for already-marginalized groups including low-income, Indigenous, and women-led families with children. Already-marginalized groups predominantly rely on rental housing and have experienced disproportionately higher rates of income and job losses – leading a number of tenants, who were already paying unaffordable rents, to be evicted from their homes.

In response to this housing precarity among tenants, the Committee recommends Canada revise provincial and territorial eviction laws to ensure that they prioritize the best interests of the child, and that all avenues to prevent evictions are pursued. Terminating the tenancy should only be the last resort.

With eviction being a serious assault on dignity that can place people’s health and lives at risk, all levels of government should work to prevent eviction wherever possible. We’re excited to see that this major violation of human rights was recognized with urgency in the review and mandated for Canada to address.

Developing a rights-based culture in Canada

To further develop a deeper understanding of human rights, the Committee recommends Canada incorporate human rights education into mandatory school curriculum across all provinces and territories – an exciting mandate to promote the public education of the human rights framework and what it looks like in practice.

We’re thrilled to see these recommendations to Canada from the Committee to address the major concerns relating to child homelessness and housing precarity.

The right to adequate housing is a fundamental and legislated right for all children and families across Canada. These recommendations from the Committee on housing are extremely valuable for the Federal Housing Advocate to follow up on and hold the government accountable to ensure Canada implements them into policy and fosters a culture of human rights across the country.

PREV
Violations of children’s right to housing in Canada: Submission to the UN Committee on the Rights of the Child
NEXT
The Housing Tell: A “Two Million Homes” Program