The right to housing in action: Transforming housing law and policy in Canada

Today, the National Right to Housing Network and Women’s National Housing and Homelessness Network release a set of three research reports on how to realize the human right to adequate housing in Canada through law and policy. These papers, commissioned by the Office of the Federal Housing Advocate, offer concrete recommendations and detail how Canada can implement a rights-based approach to housing in order to meet its obligations under domestic and international law.

Today, alongside the Women’s National Housing and Homelessness Network, the National Right to Housing Network releases three important papers on how to practically apply and realize the right to adequate housing in Canada—including analyses, recommendations, and details on what this human right means for the future of housing law and policy. 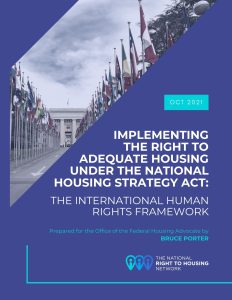 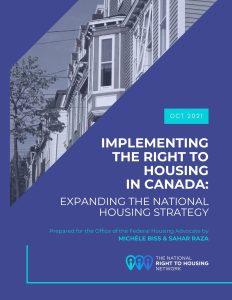 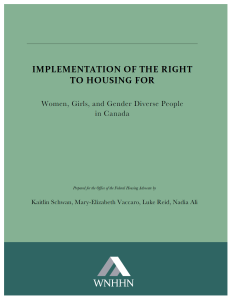 Here’s what you need to know.

Canada has had international obligations to uphold economic and social rights like the right to adequate housing for decades—but it was deeply resistant to upholding these rights for years, especially compared to other affluent countries. 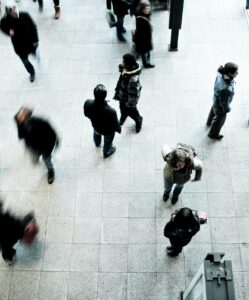 The truth is that Canada’s existing housing systems are inherently broken, and they need serious, transformative change—the kind of change that can only be achieved when we stop focusing on a powerful real estate sector and even on numbers of housing units available, and instead focus on the people who are actually living in housing need or experiencing homelessness (i.e. rights-claimants).

The right to housing is about more than a roof over your head—it’s about dignity. It’s about the well-being of the person. It’s the core right and principle that our housing and homelessness laws, policies, and programs should be built upon.

That’s why the new right to housing system created through the National Housing Strategy Act does not rely on courts for justice. Instead, it uses a “dialogic approach” which is much less adversarial and final than a court case. It allows for rights-claimants to exercise their right to housing by bringing forward what we call “systemic claims” (i.e. the big barriers that are driving Canada’s housing crisis). In this system, rights-claimants are involved in a participatory and ever-evolving process where their rights are consistently valued and amplified—and they play a central part in developing recommendations to change the housing system that we know is broken.

Practically, this dialogic system is dependent on a Federal Housing Advocate who will receive and investigate systemic claims, and then make recommendations to the Minister of Families, Children, and Social Development who must respond within 120 days. The Federal Housing Advocate also has a unique opportunity to refer cases to a Review Panel, made up of 3 members of the National Housing Council, who will hold open hearings on systemic cases. Recommendations from these hearings will also go to the Minister, who again must respond within 120 days, but via a tabled response in the House of Commons and the Senate. For more on the substantive context of the right to housing and the transformative nature of the National Housing Strategy Act, check out Bruce Porter’s paper entitled, “Implementing the Right to Adequate Housing Under the National Housing Strategy Act: The International Human Rights Framework.”

Where does the right to housing come from?

It’s important to remember that the right to housing in not an abstract concept, nor does it mean that the government has an obligation to buy everyone in Canada a house. Just like every other human right (like the right to freedom of expression, or the right to freedom from cruel and unusual punishment), there is a whole legal framework that international authorities like the United Nations have explored and written about for decades. 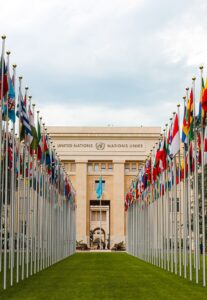 The National Housing Strategy Act specifically refers to the International Covenant on Economic, Social, and Cultural Rights (which Canada signed in 1976), and in particular commits to the “progressive realization of the right to adequate housing.” With these commitments come international standards like a requirement that Canada commit a “maximum of available resources” to housing and ending homelessness by “all appropriate means”, including through the “adoption of legislative measures.” These standards need to be applied alongside Canada’s other human rights obligations, for example for Indigenous persons under the UN Declaration on the Rights of Indigenous Peoples.

The Committee on Economic, Social, and Cultural Rights (i.e. the independent UN body that reviews each country’s compliance with the International Covenant on Economic, Social, and Cultural Rights every 5 years) has provided concrete advice on what the right to housing means in action. For example, they have said that governments have an obligation to prevent evictions into homelessness wherever possible. Importantly, Canada also has an obligation to adopt targets and timelines for the reduction and elimination of homelessness within the shortest possible amount of time, and this means that we also need mechanisms to address systemic barriers to housing. This is further reflected in Canada’s commitment to the Sustainable Development Goals (some may know these as the SDGs), in which we promised to eliminate homelessness by 2030.

One more important concept that the UN has put forward is the standard of “reasonableness” to determine the extent to which a government’s actions are aligned with the progressive realization of the right to housing. When thinking about how the right to housing applies in Canada, the reasonableness standard encourages us to ask questions like: “has the government engaged with people affected to develop solutions to big systemic barriers to housing?” or “are the various levels of government cooperating with each other and sharing their human rights obligations?”

Alongside the new rights-claiming mechanisms in the NHSA, the Act also creates a requirement that housing policies (and especially the 2017 National Housing Strategy) are consistent with the right to housing. United Nations authorities have been encouraging Canada to establish a rights-based housing strategy for decades, and have also developed criteria for what a genuine rights-based housing strategy looks like and means.

In the paper entitled “Implementing the Right to Housing in Canada: Expanding the National Housing Strategy Act,” authors Michèle Biss and Sahar Raza break down the elements of a rights-based housing strategy as outlined in international human rights law—and offer an analysis of Canada’s current housing strategy according to these international standards. This paper finds that many critiques of the NHS from rights-claimants, civil society, and academic experts are directly tied to its lack of a rights-based approach. For example, Canada’s inadequate investments in low-income housing can be tied to Canada’s failure to meet the standards of reasonableness and a maximum of available resources. Moreover, Canada’s housing data can be better disaggregated to ensure that programmatic housing efforts support those most in need, and to make sure that resources are available for rights-claimants to bring forward systemic claims (in accordance with Canada’s human rights obligations to provide access to justice).

Concretely, this paper weaves recommendations from civil society with international human rights guidelines and standards to recommend that Canada take rights-based actions such as: 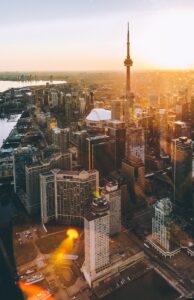 For further analysis, check out this document which assesses the 2017 National Housing Strategy according to the ten elements of a rights-based housing strategies as outlined by the UN Special Rapporteur on the Right to Adequate Housing.

What does this mean for specific marginalized groups like women and gender-diverse persons? 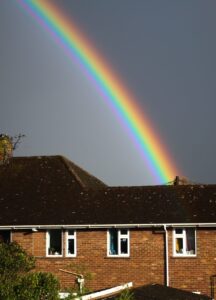 In the Canadian context, women, girls, and gender diverse peoples are one such group, with research indicating that many live in insecure or unsafe housing due to inequity and discrimination. There is a severe lack of affordable and appropriate housing that meets the needs of diverse women and women-led families in Canada, and these groups experience disproportionate levels of core housing need and poverty. Many remain trapped in poverty or in situations of hidden homelessness, putting them at risk of exploitation and abuse while also rendering their needs invisible to mainstream supports, systems, and policy development. The result is widespread violations of the right to housing that are profoundly gendered.

In the paper entitled “Implementation of the Right to Housing for Women, Girls, and Gender Diverse People in Canada“ by Kaitlin Schwan, Mary-Elizabeth Vaccaro, Luke Reid, and Nadia Ali, the authors explore how gender-based inequities within four National Housing Strategy programs are inconsistent with the right to housing. For example, Reaching Home (the primary NHS program aimed at reducing homelessness) has sought to prioritize addressing chronic homelessness in its programs, and the 2020 Speech from the Throne committed the federal government to ending chronic homelessness in Canada. However, the definition of chronic homelessness employed by Reaching Home has been critiqued for failing to account for the ways in which women experience homelessness. This failure contributes to inequitable investments for women who are homeless and severe gaps in supports, services, and emergency housing. As such, the effect of the current definition of chronic homelessness contravenes the government’s obligation to guarantee substantive equality and non-discrimination in the area of housing.

Similarly, the paper notes that the National Housing Co-Investment Fund does not articulate clear targets, timelines, or indicators for its impact on women and gender diverse peoples, including groups that are experiencing intersectional discrimination and the most severe forms of housing instability in Canada (e.g. refugee women-led families fleeing violence). This prevents ongoing monitoring of progress on the realization of the right to housing for these groups, and makes it difficult to assess whether the NHS is reaching its overall goal of ensuring that 25% of its resources are dedicated to women and girls.

As a new federal government forms, there are incredible opportunities to use the National Housing Strategy Act to transform our housing systems. For example, to make the right to housing a reality, systemic claims must be brought forward by rights-claimants to the Federal Housing Advocate (whose appointment is expected within 100 days), with the support of civil society advocates. And as the Canadian Mortgage and Housing Corporation conducts a broad review of the National Housing Strategy, civil society can push for changes that genuinely transform our broken housing system into one that centers people directly affected by homelessness and housing need.

The National Housing Strategy Act makes the right to housing more attainable, and we already have the tools to transform our broken housing and homelessness systems. Now is the time to act.

To learn more, check out these reports:

Affordable housing is eroding at a faster rate than it’s being produced, and Canada’s housing policies and programs are not reaching people in greatest housing need. This paper assesses Canada’s leading housing policy—the National Housing Strategy—through a rights-based lens to reveal its gaps and offer recommendations for improvement using human rights standards.

Already marginalized groups like Indigenous peoples, persons with disabilities, people of colour, Black people, youth, women, immigrants, refugees, gender-diverse persons, seniors, and persons on fixed incomes bear the brunt of the housing crisis. This paper offers a case study on how already-marginalized groups like women, girls and gender diverse persons are uniquely impacted by the housing crisis, and how we can better address their needs using a rights-based approach.

PREV
Honouring the National Day for Truth and Reconciliation
NEXT

If you wish to become a member and join our mailing list to receive correspondences, newsletters and updates on the NRHN, please fill out the form here: